The twin structures at each of Rooftop’s campuses are established to create a familiar and welcoming space that supports artistic learning and doing rooted in play.

The Studio is a creative space where children can explore, experiment and experience the pleasures of active, applied arts learning. Children may choose to work independently or collaborate with others, but all will receive encouragement and support, as they begin to imagine and create the world that they wish to live in. 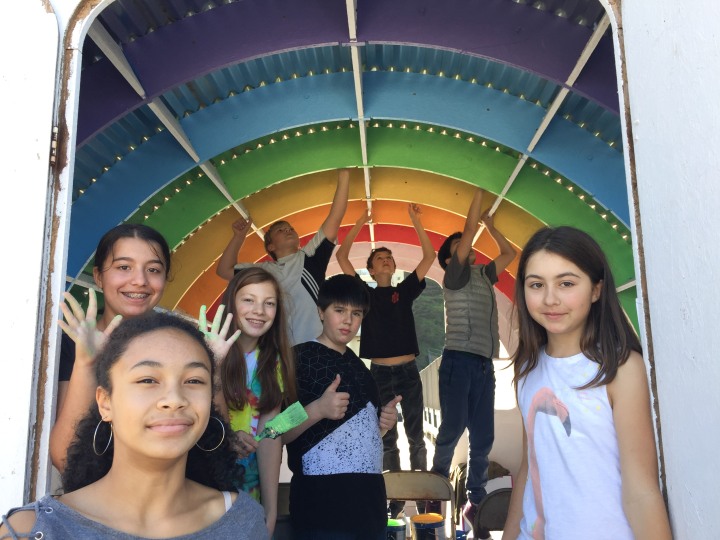 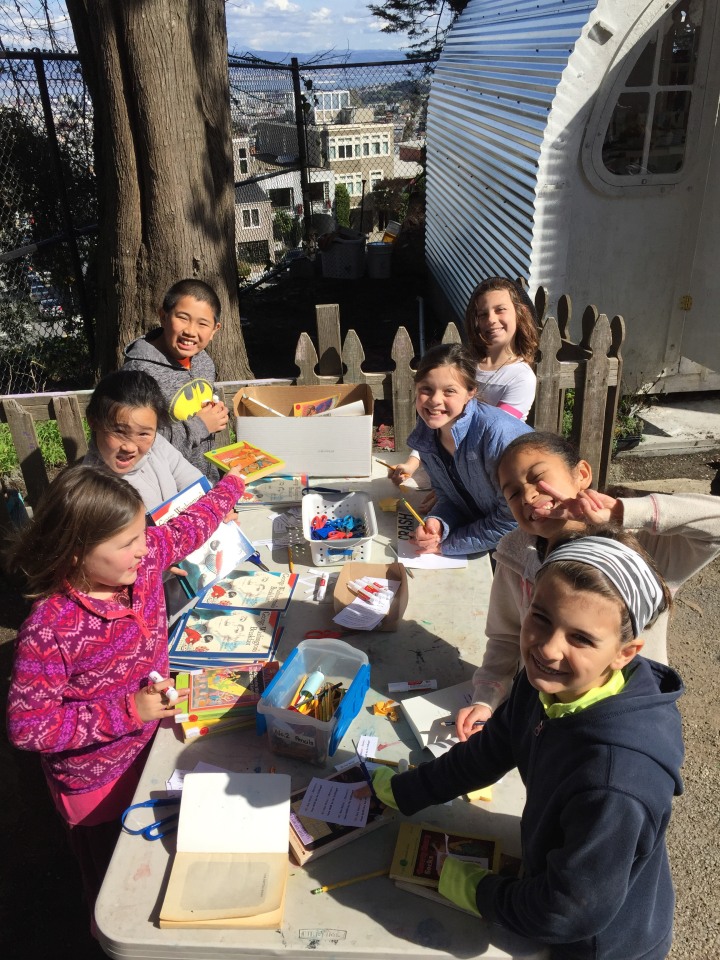 The Story of Rooftop School

The Story of Our Schools – an essay written for a special project initiated by the San Francisco Unified School District to create a publication capturing the history of SFUSD site names.  2017 marks the 20th anniversary of the opening of the Nancy Yoshihara Mayeda Campus. 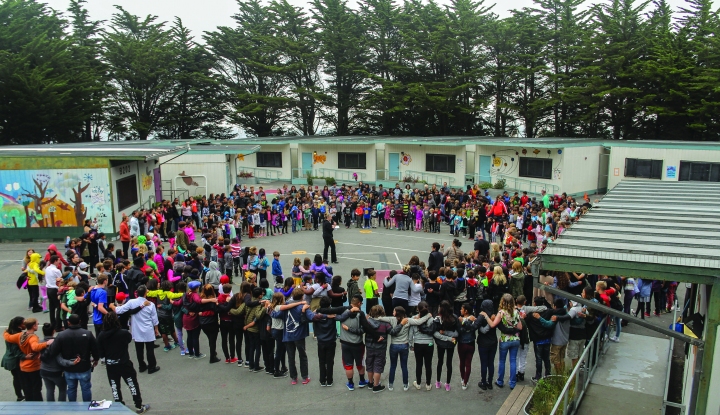 The story of Rooftop Alternative School is full of twists and turns, much like Corbett Avenue, the historic meandering road that connects the school’s two campuses. Constructed in the 1860s, “Old Corbett Road” winds through the hilly terrain of the east side of Twin Peaks, an unusual departure from the mostly gridded streets of San Francisco. Across the expanse of time, a stream of travelers have journeyed down this road, from the Ohlone, the Spanish, rancheros, loggers, farmers, and perhaps even survivors of the 1906 Earthquake. Today, the quiet neighborhood street is animated by a daily parade of yellow school buses and the sounds of children playing. 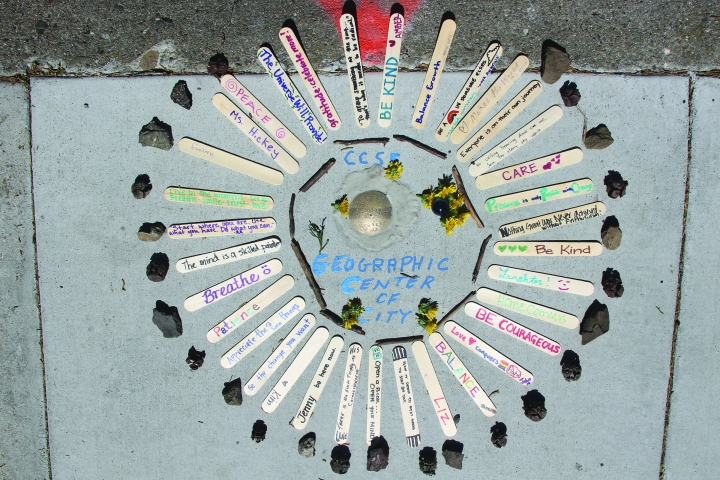 This road leads to the geographic center of San Francisco, where you will find Rooftop Alternative PreK-8 School occupying two school sites, each within easy walking distance. Rooftop draws students from all corners of the City, and has been noted as one of San Francisco’s most diverse public schools. The school currently serves 594 students and their families – 329 PreK-4th graders at the Burnett Campus and 265 5th-8th graders at the Mayeda Campus. While the Twin Peaks location has rewarded the school with spectacular views of the Bay Area since 1978, the school was actually founded seven years earlier – an ideal begun on a rooftop. Hence the name: Rooftop School. 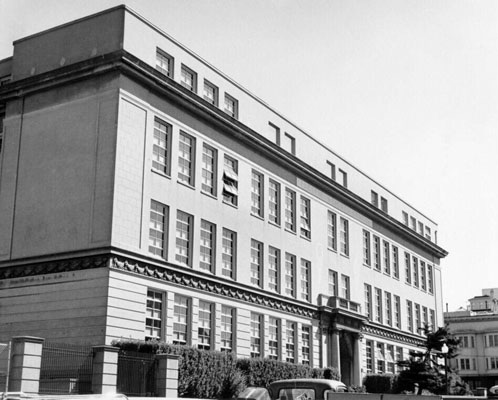 In 1971, seven young teachers from three different inner-city schools – Ernie Baumgarten, Bob Beckstrom, Tom Chenoweth, Janice Ide, Gus Kearney, Jim Nice, Louise Stovall – came together “to develop curriculum, and break down the isolation of working alone in fragmented schools.” After a year of meetings, they found a common ground in their ideas about teaching and children. The group calling itself, “Teachers for Active Learning,” outlined the new school’s philosophy and put forward a proposal to create a new school based on an alternative model. On May 4, 1972, the San Francisco Board of Education approved their proposal for an alternative elementary school for grades 4 through 6. The school was given space at the Pacific Heights Elementary School at Jackson and Fillmore. There, on the fourth floor that served as a locker room, teachers and parents worked together to scrub the floors and beautify the space with murals and planters. Forty years later, three of the school’s founding teachers recalled washing down the walls with a fire hose and painting a large circle in the small courtyard on the rooftop, in hopes of defining a place of order and welcome for all students. The teachers instituted a daily ritual called “Morning Circle,” an all-school gathering that shares news of the day and culminates with the communal singing of the school song, Open The Door — a school tradition that continues today. 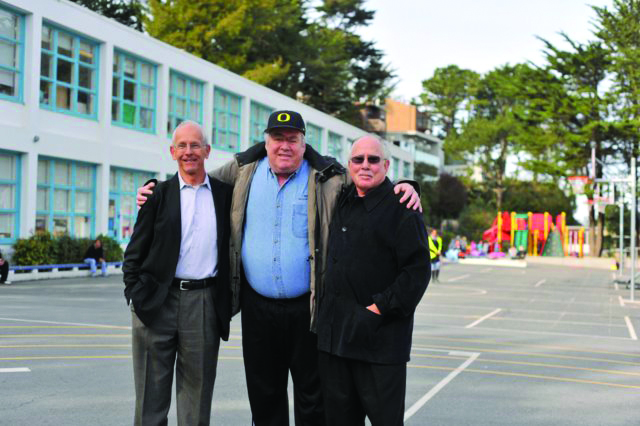 Rooftop Alternative originally had 6 explicit goals: openness and trust in interpersonal relations; student freedom to make mistakes and work independently, active learning, a curriculum where there was consistency and continuity; utilizing the entire school site as a setting for learning; bringing the city into the school. Rooftop’s educational innovations included “strength” teaching in teams, and classrooms organized in multi-age, multi-grade, racially diverse “family” groupings that collaborated to support academic achievement, social growth, and emotional well-being. Students worked at their own pace, receiving small group instruction, and parental involvement and community support was welcomed. Literature was read instead of textbooks, and social study units were created to represent the diverse student body. Rooftop was the first San Francisco school to establish an activity-oriented curriculum with the Exploratorium. 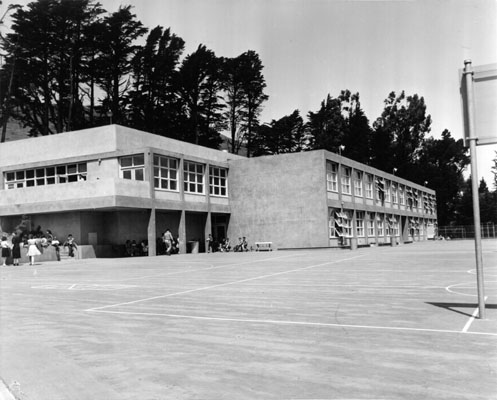 In 1978, Rooftop moved from Pacific Heights to its current Twin Peaks location, as part of the district’s Redesign Plan to become a K-5 school. Today, the school site at 443 Burnett Avenue is known as Rooftop’s “Burnett Campus.” The Burnett facilities are nestled in trees on three acres of land, bounded by Burnett Avenue, Corbett Avenue and Dixie Alley, a setting rich with the nature and biodiversity of Twin Peaks. The school site was built on farmland after being purchased by SFUSD for $47,000 in 1953. Thereafter, the old wooden schoolhouse at 500 Corbett, designed in 1918 by John Reid, Jr., San Francisco’s official City Architect from 1917-1927, was alternately referred to as Twin Peaks Annex, Corbett School, and Corbett Community School. The building was closed in 1976, vacant for almost a decade, before Rooftop principal Nancy Mayeda presented Superintendent Bill Rojas with her idea to transform the abandoned neglected site into a new middle school that would allow Rooftop School to become a K-8 program. 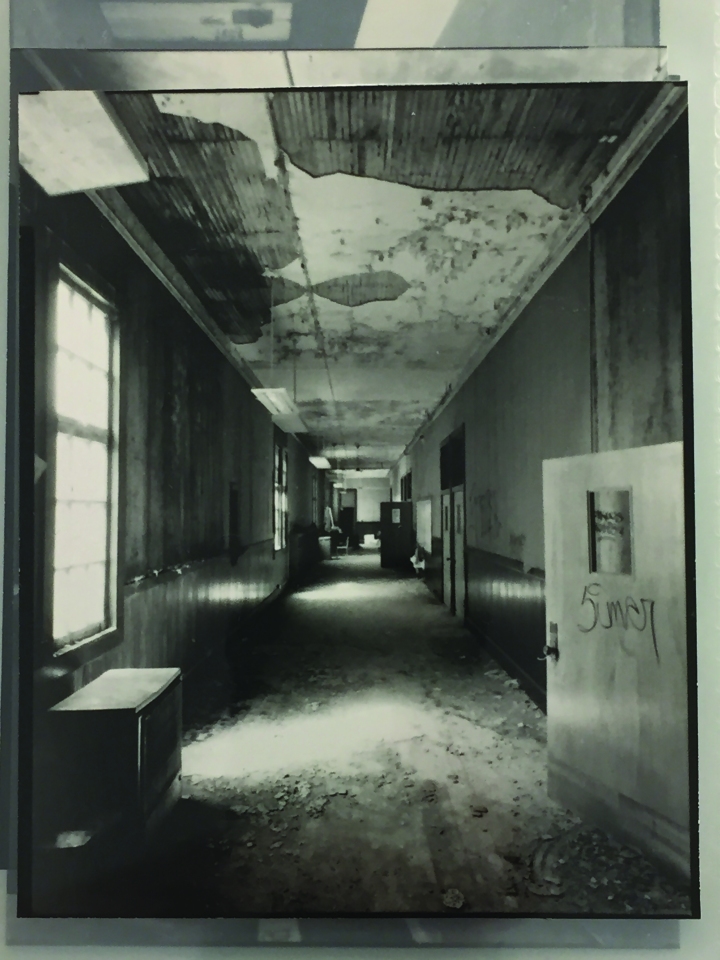 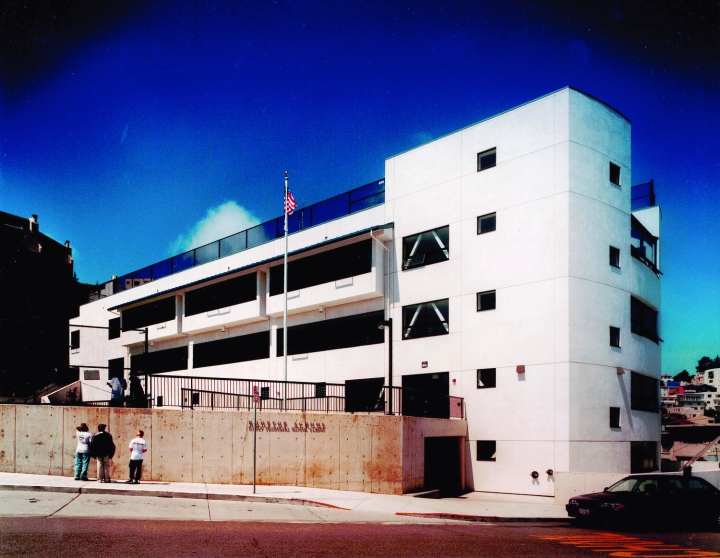 When SFUSD appointed Nancy Mayeda as the principal of Rooftop School in 1982, only one of the original members of the founding Rooftop group remained. Nancy had been a classroom teacher at Argonne Elementary School, prior to working in administration and teacher development. During her tenure as Rooftop’s administrator, the school became known for its model program, a devoted staff and active parent community. Under her leadership from 1982-1998, Rooftop built the school’s foundational programs (sensory motor, garden, library, computers, outdoor education, and community service programs) that are still in place today. Quality arts programming became an important part of the Rooftop school experience with the establishment of the Rooftop Art Parent Program (1982) founded by artist/educator Aiko Cuneo, the daughter of artist/sculptor/arts advocate Ruth Asawa, and Rooftop-In-Performance (1984), a performing arts program. These innovative programs were established to educate the whole child, and in turn, they helped to define “Rooftop Spirit,” the sense of community that pervades the school to this day. 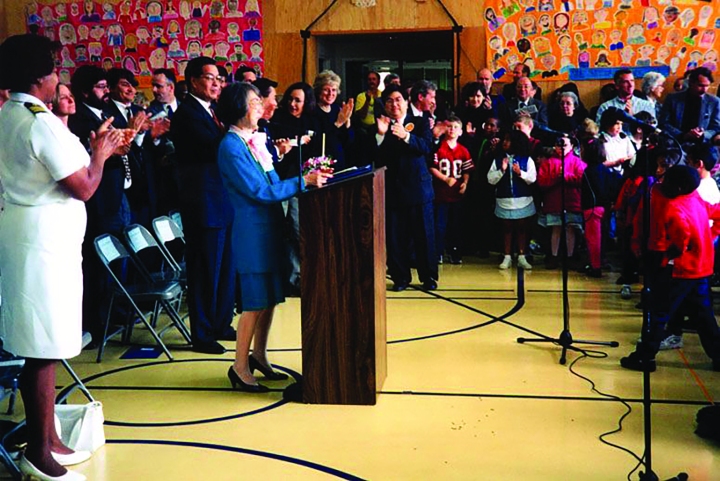 On April 30, 1997 the Rooftop community gathered to celebrate the opening of the “Nancy Yoshihara Mayeda Campus” on the site of the original Twin Peaks School at 500 Corbett Avenue. With the opening of the new Mayeda Campus designed by Lemanski & Rockwell Architects, Rooftop became a K-8 school. The joyous celebration featured congratulatory speeches by the Board of Education, student performances, and even an appearance by Glinda the Good from Beach Blanket Babylon (the longest running musical revue in live theater history), capping a five-year effort to construct the school that bears Nancy Mayeda’s name. But as one of the 9,000 Japanese Americans who were imprisoned at the Minidoka War Relocation Center in Idaho during WWII, Rooftop’s principal took a moment to reflect on the significance of the achievement “Being a teacher was an unattainable profession for my aunts when they graduated in the 1930’s. Japanese Americans were not allowed to be certified.” Nancy Mayeda spent her early childhood years from kindergarten to second grade, learning amid barbed wire fences, guns and guard towers. In 2007, while speaking to students about her internment experience, she reflected on the important role of the arts in challenging times. “Passing the day was very difficult, and one of the things that kept their spirits up was the arts. The art is a unifying factor, whether it be the visual, the drawings, or the performing arts, the singing. In times of hardship, sometimes that transcends the ages, and that is why this is a creative arts magnet school… Art is the one thing that endures for all time.” 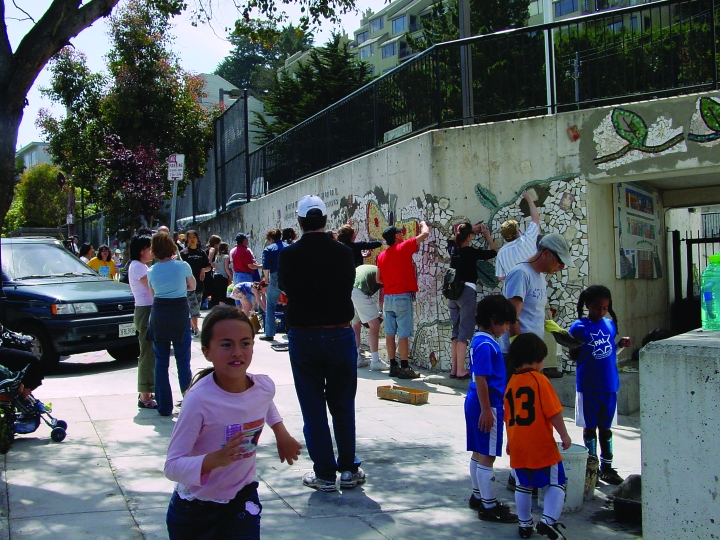 When you visit the Mayeda Campus, be sure to look for the thin sliver of poetry written by Langston Hughes embedded in the mosaic that runs parallel to the street. Once upon a time, these letters were pressed one by one into soft, pliable clay by a child. The earthen tiles were fired and set into the textured wall by loving hands… to be enjoyed by the traveler who stops for a moment at Rooftop School, before continuing on down Corbett Avenue.

In time of silver rain

To catch a rainbow cry,

And trees put forth new leaves to sing

In joy beneath the sky

As down the roadway

This 2016-2017 school year,  thanks to a generous grant from the Internet Archive, Rooftop School students are participating in the IA’s K12 Archiving Program, which provides an opportunity for students to select and save websites for future generations (historians, scholars, their descendants, the general public) to look at 50,100, 500 years from now. The program is finishing its seventh year and was originally developed in collaboration with the Library of Congress Digital Preservation program

This innovative K12 archiving program provides a new perspective on saving history and culture, allowing students to actively participate and make decisions about what content will be saved. Often this is content that might not be selected and saved in the traditional archive environment. The decisions the students make help them develop an awareness of how the Web content they choose will become primary sources for future historians studying our lives. The program teaches critical thinking, collaboration and problem solving – essential life skills that students need today in order to be successful.

This new ArtEd4All project at Rooftop has been evolving over the course of the year, in tandem with the development of two brand new creative spaces, The Studios at Mayeda and Burnett. ArtsEd4All teaching artist Andi Wong and retired Rooftop instructors Judy Toupin and Mary Ann Cruz have been designing hands-on experiences that invite participants of all ages to work together using the arts to build empathy, intelligence, optimism and unity.

ArtsEd4All (Arts Education for Awareness and Life-long Learning) is an informal collective of educators, artists, scientists, civic institutions and community organizations, who enjoy working together to create meaningful arts experiences for all to enjoy. For more visit: artsed4all.blog .

The Studio is a creative space at Rooftop School where children can explore, experiment and experience the pleasures of play and active, applied arts learning. Children may choose to work independently or collaborate with others, but all will receive encouragement and support, as they begin to imagine and create the world that they wish to live in. The Studios @ Burnett & Mayeda.

The Internet Archive’s K12 Archiving Program provides an opportunity for students to select and save websites for future generations (historians, scholars, their descendants, the general public) to look at 50, 100, 500 years from now. Visit the Rooftop ARTchives.
Loading Comments...
Comment
×